Information regarding The Newnham Historical Collection is available here.

Newnham History Group is a small band of members interested in researching the history of Newnham.

We each have our own particular interests and meet in each other’s homes fairly regularly to compare notes and to discuss future projects.  Between us we have a large collection of photographs, press cuttings, Census returns and other items.

We hold regular events in the Armoury Village Hall, including picture evenings and talks. We plan to resume these evenings after the lifting of all Coronavirus restrictions. We put on exhibitions occasionally, the most recent being  on World War One and Newnham in August 2014. In conjunction with the exhibition we created plaques that we placed on buildings throughout the village to indicate the family homes of Newnham servicemen (blue plaques for those who returned and black for those who did not). Some of these plaques are still in place.

In 2019 Newnham History Group completed the project to create a detailed map of St Peter’s churchyard. This project was researched by Sandra Champken and produced by Sandra and Graham Champken in a four-year project of mapping and cross-referencing the available data. We hope the map will enable visitors with Newnham links to find their ancestors’ graves more easily. The main map is complemented by a number of enlarged sections of the map and a spreadsheet name index (arranged in alphabetical order of surname) that contains the names of over 2,000 people commemorated on gravestones. These items are now on permanent display in the church.

To find a person look up the name of the person here.  Take a note of the grid and section reference.

To find the location of the grave click on this link which will display an overall plan of the churchyard.

These links and pages are under development.  For the time being there is only an overall plan.  We hope at a later stage to be able to provide a link to more detailed plans of each grid square.

See also details of the Newnham Graveyard Walk, listed below under Publications.

To date we have published the following books and articles:

All three volumes are available  to buy from Newnham Post Office and TheShop@TheShip or by mail order from Newnham History Group.

These volumes are all available to read at Newnham Community Library. They may not be borrowed from the Library.

We also have for sale a few second-hand copies in good condition of Newnham-on-Severn, a Retrospect by Mabel K Woods.

In addition we have an extensive digital record of Newnham material, including Census records, photographs, and information on  gravestones in the older part of the churchyard. We are working to make this more accessible.

We meet every month or so and would love to welcome more members interested in studying the history of Newnham.

Here are five pictures that give a snapshot of Newnham’s past. 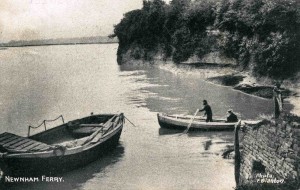 Newnham owes its existence to its favourable position on the River Severn, and has been an important river port and a centre of ship-building and fishing. A fee-paying ferry to Arlingham, carrying passengers and livestock,  existed from 1802 until after the Second World War, when it gradually went out of use. The photo of passengers waiting for a ferry is dated approximately 1920. 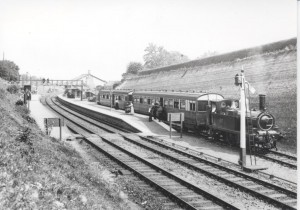 The railway (the main line from Gloucester to South Wales) came to Newnham in the 1850s and there was a station (of which there is now no trace) at Newnham till 1964. There was also a railmotor service to Cinderford and Drybrook (1907–1958)  and a  branch line to Bullo Pill (closed 1968). This photo from about 1910 shows a train standing at platform 3. 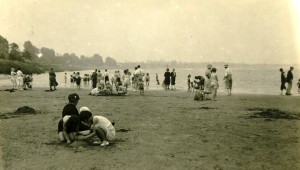 In the early 20th century day-trippers came by train (often by the railmotor from the Forest) to Newnham to play and picnic on the sands. Care had to be taken with the incoming tide due to the speed of the water. Constant changes to the current and flood defence schemes in the 1980s have removed the sands but made the area safer. 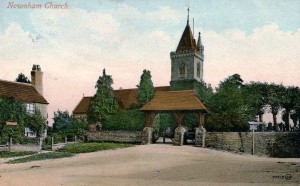 St Peter’s Church is now the only place of worship in the village, but in the early 20th century there were several others. The present church (the latest of a succession of churches) dates mainly from 1881, a fire having destroyed all but the tower of the previous building. The house in the foreground of this photo was demolished in 1911 and a new churchyard was built

This 1950s photo of the Lower High Street shows the clock tower, which was erected by public subscription in 1875. This photo was taken before the Surgery was built (in the 1980s), and before the substantial building known as The Beeches was demolished (in 1968) to allow the road to be widened. (The name is retained in a street name and in the popular name of the grassy area beside the main road at the entrance to Newnham.)

There are many organisations and societies for people interested in all aspects of local history.