“WELCOME TO OUR PEACE GARDEN” 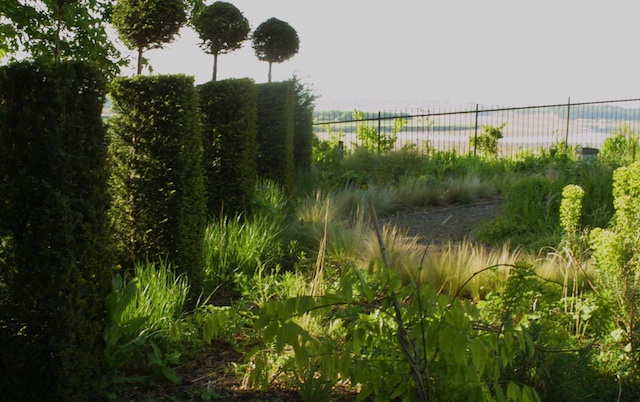 Newnham Peace Garden was created by the people of Newnham as a permanent memorial to those who died in the tragic events of 9/11. The Garden lies at the bottom of St. Peter’s churchyard in a delightful position overlooking the river Severn. The aim has been to provide a small area of peace and calm in a world that at times seems beset with noise and aggression. 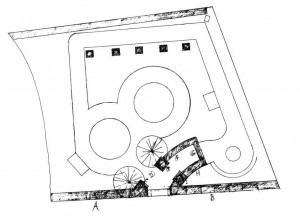 The Garden is the work of many hands. The land was given by Newnham Parish Council and funding for the garden was raised by the villagers following an initiative by Donald Norfolk, as well as by donations from the Cheltenham and Gloucester Building Society, the Co-operative Society and the Conservation Foundation.

The garden was designed by Vivienne Davies MSGD, a professional garden designer from Woolaston, Lydney, based on an original idea by Donald Norfolk, the well-known local author. The hard landscaping was carried out by youngsters performing community service under the aegis of the Gloucester Probation Service and the planting was carried out by volunteers in the village, firstly under the supervision of Ken Vaughan, former Head Gardener at the National Trust of nearby Westbury Court and of Roger Grounds FLS, a noted horticulturalist and Chelsea medal winning designer, resident of the village who now maintains it.

The seats were created by students from the Forest of Dean College, under the supervision of their tutor, Andy Waller. One of the seats was donated by Rosemary Penfold (née Head) and her sister, Joan Head, in memory of their parents Harry and Margaret Head.

The Garden deliberately contains much symbolism. It is entered through an archway of local timber in the shape of the letter pi – which is a symbol both of eternity and a transcendental number. The lintel is set low to encourage visitors to bow their heads as a mark of respect to the space inside. This is a traditional rite of passage in Japanese tea gardens. On the lintel a brass plaque reads Beati Pacifici – Blessed are the Peacemakers.

On entering the garden one is encouraged to proceed anti-clockwise, the traditional direction for ceremonial processions. This leads one between low yew-hedges to a view of the river and across the Vale of Gloucester to the Cotswolds beyond. This is a rond point marked by a circular table carved by Newnham craftsman Jonathan Daniels from local stone donated by a Forest of Dean quarry. The semi-circular seat behind it has been temporarily removed for repair.

Turning left one comes to the brass sundial that was specially cast for the Peace Garden. It was designed and donated by Donald Norfolk, who also wrote and had inscribed the three-line Japanese haiku, ‘May the calm within/Bring harmony in the home/And peace to the world’. The dial portrays two doves, universal symbols of peace.

At the bottom of this path is a slightly raised slab of stone. This was rescued from an earlier medieval church which was demolished because it was in danger of falling into the river as the cliff below was crumbling. The church was rebuilt higher up the hill in its present position. The then incumbent, the Reverend John Seaman, kindly allowed it to be taken from its resting place in the church to its present use and position. It is lightly carved with a cross fashioned in the shape of the Tree of Life. Across the horizontal is deeply etched the word resurgam, ‘I shall rise again’, symbolising the need for regeneration after episodes of loss and devastation. It recalls the moment when, after the Great Fire, Sir Christopher Wren was rebuilding St. Paul’s Cathedral and, needing a stone to mark the epicentre of the great dome was by happy chance brought a broken piece of tombstone with the word resurgam.

At the heart of the garden is a leminiscate, a figure of eight, the universal mathematical symbol for eternity, the figure has no beginning and no end. This is formed by the paths around and between two circular beds. These are planted in contrasting colours, one with cool blues, pinks, whites and mauves: Agapanthus, Nerines, daylilies, Gaura, Limonium; the other with hot reds, yellows and oranges including Helenium, Rudbeckia, pale yellow Solidago, Kniphofia, daylilies many Crocosmia and Golden Hakone grass. Planting has been kept low so as not to obstruct the views.

The border beside Church Road is planted for winter interest and coloured foliage, with blue and white hardy geraniums to follow in the summer. By the railings overlooking the river are alternating squares of Persicaria and Achnatherum calamagrostis. Other beds contain forms of Miscanthus grasses underplanted with hardy geraniums. A pair of olive trees, which are symbols of peace are planted near the entrance.

At the bottom of the garden five pre-existing yews are being shaped into topiary terms. These are known as the Five Heretics, and are linked by a perennial hedge of feather reed grass. The yew hedges separating the Peace Garden from the Burial Ground are to be cut level with the bottom of the lintel, with regularly spaced semi-circles cut out giving tempting glimpses into the garden itself.