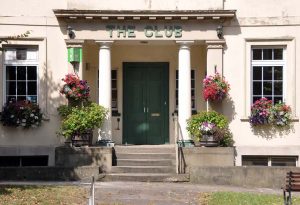 Like all of us the Club has been affected by the Covid 19 pandemic.

During the first Lockdown the doors were closed but thanks to the efforts of Maggie and Ian (Treasurer) the various grants and furlough successfully claimed.

After Lockdown 1 The Club again opened its doors for four days a week.  A full social distancing regime was implemented including table service only (Thanks Emily).
Other activities were restarted using the upstairs Function Room.

Lockdown 2 saw all activities terminated but the end of Lockdown, and now in tier 2, saw Upstairs activities re-commence.
Again Maggie and Ian have claimed all possible support and Maggie has made extra efforts to reduce all overheads (electricity, gas and licences) meaning that the finances are in a reasonable state.

That is the current state of play and the committee and Maggie have made provisional plans for the future covering the Christmas period, an eventual opening in the New Year and have put arrangements in place to deal with Glen and Maggie’s move to more suitable accommodation.

If you use Facebook you can see what’s on here

Check What’s on and Availability of Function Rooms Click Here

Newnham Club is a social and sports club situated in a fine building in the centre of the village.  In addition to the bar and a family friendly atmosphere it offers a number of activities including skittles darts, snooker, pool, a garden with a barbecue and an area where you can watch televised sport.  It also has a large function room with a bar that can cater for a wide range of events.

The management of the Club is overseen by a Committee which is elected annually by its members. The Club is situated on the High Street in close proximity to the Town Clock.  The building was constructed in 1849 for Subscription Rooms and is built of brick faced with stucco and has a neo-classical front with a recessed Doric porch. The land was purchased in 1848 for £310; the existing buildings were demolished and the Subscription Rooms and cottage erected at a cost of £1,750.  It was funded by 25 undivided shares held in trust, each of the shareholders contributing £70 towards the cost. The Subscription Rooms were run by a Committee for the purpose of magisterial meetings, County Courts and concerts, plus any other public or private functions as agreed by the Committee. It also had designated lecture and reading rooms.  The shares changed hands as time progressed but by 1879 Samuel Wilkinson Woods obtained all of the shares and the Subscription Rooms were conveyed to him.  It appears that it was about this time when the building then became known as the Town Hall. Ownership of the building remained with the Woods family until 1920 when it was sold by the Misses Charlotte Emma and Mabel Kate Woods to the Trustees for the Newnham Branch of the Comrades of the Great War.

The Committee of the Comrades Club had resolved to purchase the premises at its meeting held on 5th June 1920 for a sum of £1,550.  The Trustees to hold the premises known as “The Town Hall” together with the Cottage and Garden upon trust for the Members of the Club.It was renamed the Comrades Hall but by 1939 had become Newnham Club as it is known today. Newnham Club has a membership that includes people from varying age groups and interests and is used both by individuals and members of teams and groups including Skittles teams and the Newnham Players

The Club welcomes members both old and new, so if you are interested in joining, just visiting the village or wishing to hire the function rooms, please call in or contact our affable Manager Glenn Jones who will be more than happy to help.

The bar opening hours are as follows: