Belfry plans hang in the balance

Church officials in Newnham are awaiting a structural engineer’s report to discover whether their Victorian church bells can be fully restored.   Over a century of wear and tear have left the bells of St Peter’s notoriously difficult to ring and despite an expected bill of well over £100,000, the church is determined to revitalise bell-ringing in the village.  But the viability of their plan depends on the report, expected in the New Year.

Adrian Dempster, a structural engineer with Nottingham firm, Ward Cole, was called in after concerns were expressed about the stability of the Victorian cast iron frame on which the Newnham bells hang.  Mr Dempster, a bell ringer himself, is the UK’s leading expert on the safety of church bells.  Earlier this month a band of experienced ringers from the Forest of Dean assembled to ring the bells while                   Mr Dempster’s equipment measured the swaying of the tower and movement of the frame.

If the frame can be made safe the church will go ahead with plans to raise £135,000 to carry out their scheme.  This involves modernisation of the fixtures and fittings, reduction of the overall weight of the bells and construction of a new floor a third of the way up the tower.

“We’ve been patching up as best we can for the last thirty years but despite our efforts the seventh is now silenced due to a cracked bearing, and most of the other bearings are badly worn and uneven.  The headstocks have dried out, the bells are out of balance and the clappers need replacing.  Ringing the Newnham bells has become so challenging that only a handful of ringers in the whole of the Forest are still willing to try.”

St Peter’s has the benefit of being one of the few belfries in the Forest of Dean to have 8 bells.  Rob James, the vicar of St Peter’s, has been a driving force behind the project.

“I strongly believe that ringing church bells is an important part of village life. Bells mark the cycle of festivals, marriages and sometimes deaths.  And of course on Sundays they remind everyone of what is going on inside the church. Our peal of 8 is part of Newnham’s heritage and we shouldn’t allow them to fall into disuse.  This is a once in a century opportunity to do a complete refurbishment which will secure the future of bell ringing in the village.”

To make the bells lighter the plan is to melt down the two heaviest bells and to create two new, smaller bells at the top of the scale.  This will be done at the Whitechapel bell foundry in London.  The remaining bells will also go to the foundry for retuning and in one case, recasting.  Andy Vivian, one of Newnham’s two remaining ringers, explains why this will help.

“When the bells were installed in 1894 bell ringing was very much the prerogative of men and heavy bells were seen as a challenge – a way of proving your manhood.  Nowadays women make up at least half of all ringers and any tower that looks to its future must be able to train novices.  Most new ringers are either children under fifteen or else adults over fifty.  So reducing the weight of the bells will make them more accessible for today’s ringers.  It will also relieve some of the stresses on Newnham’s slender tower as the lighter bells will carry less momentum.  The new ringing floor will be a great help because the bells are currently about 50 feet above the ringers, which is a lot of rope flapping about. From the new floor the distance will be reduced to about 35 feet which will make the bells much easier to control.”

The new ringing floor will be accessed by a spiral staircase.  Plans include a new glass screen between the ringing floor and the nave so that the bell ringing becomes more a part of what is going on in the church.

The church has appointed Nicholson Engineering of Bridport to carry out the refurbishment and Ruth Nicholls, a conservation architect with Astam in Gloucester, to handle the design.  A local committee has been appointed to oversee the project.  Treasurer, Mike Bacon, is hopeful that the extra expense of casting new bells can be covered by offering benefactors the chance to sponsor a bell and to have a dedication of their choice cast into the metal at the foundry.

“Sponsors, if they wish, will be able to watch their bell begin cast at the foundry and we’ll invite them to be guest of honour when it is rung for the first time.”

To launch the project there is to be an open evening in St Peter’s Church, Newnham from 6.30 – 8.30pm on Friday, January 22nd.  Wine will be served and exhibits will on display to explain what needs to be done. 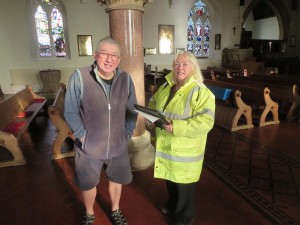 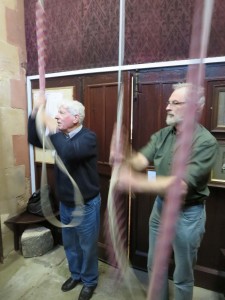 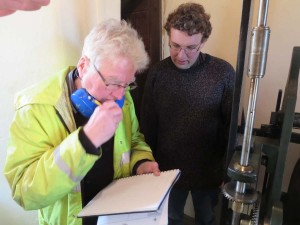